The studio’s proposals respond to contemporary issues whilst recognising the significance of the past, engaging strongly with the existing urban fabric of Spode Works and the surrounding Stoke Town, whilst drawing upon the Potteries’ distinctive sense of place. 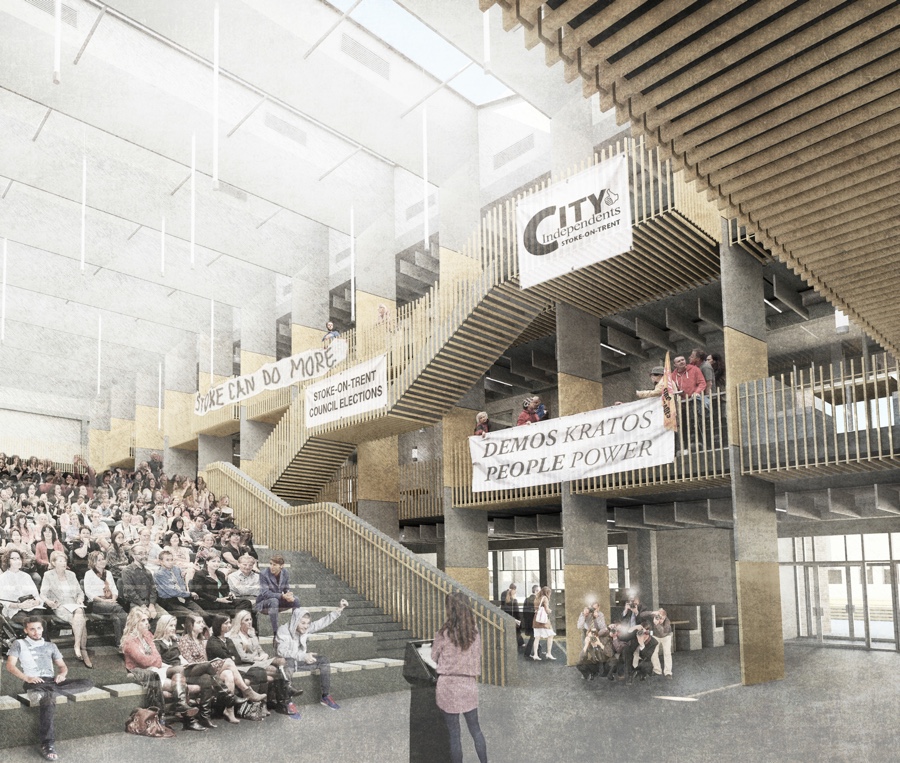 The brief for The Big Works was developed after engagement between Joe Ingham and Andy Perkin from the Potteries Heritage Society, who introduced a rich historical narrative to the project but also a glimpse into the existing community led infrastructures that were at work to enhance the quality of Stoke-On-Trent. These two strands formed the basis for the development of research that explored issues into Stoke-On-Trent’s socio-political context and more broadly the role of citizens and their relationship with the local authority in the 21st Century.

The Big Works aims to address the deficiencies of the local authority in Stoke-On-Trent, proposing a new architectural framework that fills gaps in social, urban and political contexts, re-engaging citizens and enterprise, providing them with the opportunity to co-create their society.

Reinforcing Stoke Town as the civic heart of the city, the project is located directly opposite the town hall, creating an instant dialogue between the old and new institutions. The Big Works creates a re-energised environment that works alongside the existing political system to transform the way citizens perceive and respond to the council.

The project provides a platform for active citizens to accelerate and showcase their actions collaboratively. Whilst public services and leisure facilities bring inactive citizens through the door exposing them to work already being done, encouraging them to become more active in society.

Furthermore, as local councils utilize small-to-medium enterprises more frequently, a series of co-working offices offer a relaxed working environment whereby like-minded, cross-sector businesses have the opportunity to benefit from co-locating, creating a serendipity engine where innovation can return to the public sector.

Located on the site of a former pottery (Wolfe’s Big Works), the project works in a similar way to the pottery; as a range of functions working as a collective. The central atrium ties together the individual elements of the building, with the focus on a dual aspect activity stair, providing a place for social interaction.

Externally, the building adopts simple forms with humble use of domestic and industrial red brick, developing a dialogue with the wider context of Stoke-On-Trent rather than the ornate stone façade of the town hall. The building divides the site into a series of external public spaces, a more formal civic space to the north and a south facing public square for culture and leisure activities.

The external spaces provide the framework for community led urbanism and placemaking, with pop-up events and projects creating active spaces defined by its users and becoming a live test bed for the values of collaboration and citizen-led change that underpin the project.